From our examples, we may generalize that all the principal causation is ‘down’ the sequence of multiple generative levels {A ➝ B ➝ ... }, and that the only effect back up the sequence is the way principal causes depend on previous events or occasions to select their range of operation. Let us adopt as universal this asymmetric relationship between multiple generative levels: that dispositions act forwards in a way conditional on certain things already existing at the later levels. This as a simple initial hypothesis.  We will see whether all dispositions seen as existing in nature can be interpreted with this pattern of generation and selection.

We may surmise that A, the first in the sequence, is the ‘deepest underlying principle’, ‘source’, or ‘power’ that is fixed through all the subsequent changes to B, C, etc. Conditional forward causation is the principle we saw from physics. It implies that changes to B, for example, come from subsequent operations of A, and not from C, D,.. acting in ‘reverse’ up the chain. We surmise, rather, that the subsequent operations of A are now conditioned on the results in B, C, D, etc. The operations of A are therefore the principal causes, whereas the dependence of those operations on the previous state of B is via instrumental causation, and the dependence on the results in C, D,... is via occasional causation. I suggest that this is a universal pattern for the operation of a class of dispositions in nature, namely those that do not follow from the rearrangement of parts of an aggregate object. 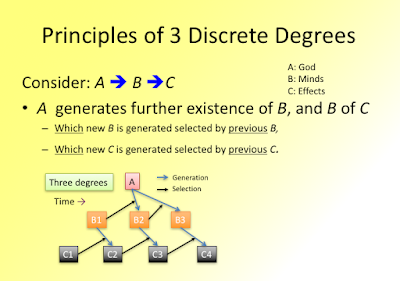 
A substance is defined as what exists over the finite duration between measurement events. The problem in quantum mechanics of understanding how substances exist has been long-standing. Some like Everett have suggested it is the wave function which exists continuously, but wave functions are mathematical entities and not physical. Others like Bohr have said that only events are real and hence denied that there anything which could be a continuous substance.

My proposal is use the idea of propensities [5]. These are the underlying dispositions or causes which give rise to events when the conditions are appropriate. The event production may be deterministic or probabilistic. The important feature of propensities is that they are present continuously between events, at least according to the Born Law of quantum mechanics.  Propensities, therefore, can be identified as the substance of which quantum particles are made. The wave function is then the form of those substances, in particular their form as spread out in space and time. Quantum objects are thus substances that manifest themselves in some kind of form. The form of something tells us what its present structure is, and the substance of something tells us how it would behave in all future hypothetical circumstances (even if only by probabilities).

We can develop a theory of multiple levels, each with different kinds of objects and each existing in their own kinds of spaces.  We can show how objects interact between levels [6]. We can begin to understand this using the principles of quantum mechanics. Consider, for example, how the Schroedinger equation makes predictions for the wave function, which in turn predicts the probabilities of future events. The Schroedinger equation uses a combination of kinetic energy and potentiality that acts to evolve the wave function through time, based on the initial conditions. The wave function then acts to produce further discrete selection events based on previous selections.  In each case, objects of kind of A are producing further objects of kind B(n) based on previous objects B(n-1). The produced B(n) outcomes select what kind of outcomes are next possible.  Furthermore, this same pattern is repeated on multiple levels {A ➝ B ➝ C}.  Quantum physics has the levels  {energy ➝  propensity forms ➝ actual selections}.  Such patterns are familiar, since in classical physics we have a similar structure with the levels {potential energy ➝ forces ➝ acceleration}.  The pattern is also familiar to us from psychology in the sequence {desire ➝ thinking ➝ action}, as will be discussed later.

When we start digging into quantum physics, we discover even more levels. The potential energy and kinetic energy that we started with in the Schroedinger equation are not themselves fundamental, but are generated by the virtual processes of quantum field theory. Potential energy is produced by the exchange of gauge bosons: of photons of electromagnetic energy, of gluons for nuclear energy, etc. And kinetic energy comes from mass, which is mostly not ‘bare mass’ but is the collection of the energies of virtual substances in a cloud around a given center.   This means that we have an even longer chain of multiple generative levels in quantum physics, something like {variational Lagrangian ➝ virtual fields ➝ virtual events➝  potential and kinetic energies in the Hamiltonian ➝ propensity fields described by wave functions ➝ selection events for actual outcomes}.

These kinds of levels are generally acknowledged to exist within quantum field theory, but with differing opinions about their significance. Many physicists and philosophers of physics want to assert the particular ‘reality’ of one of the levels and say that the prior levels are ‘merely calculational devices’ for the behaviour of their chosen real level. The question of simplicity, to be answered in order to apply Occam’s razor, is whether it is simpler to have multiple kinds of objects existing (even within multiple generative levels) each with simple dispositions, or simpler to have fewer kinds of existing objects, but with more complicated laws governing their operation.

Allowing the multiple generative levels all to exist in ‘their own way’ has fruitful consequences for generalizing quantum physics to include new kinds of causation. Admittedly this is going beyond standard quantum mechanics, but at least this is yielding predictions for possible new science which can be confirmed or falsified as all science should be examined.

Which way does causation proceed? The pattern in the material world seems to be upward: particles to molecules to organisms to brains to mental processes. In contrast, the principles of quantum mechanics allow us to see a pattern of downward causation. These new ideas describe sets of multiple levels in which each level influences the levels below it through generation and selection. Top-down causation makes exciting sense of the world: we can find analogies in psychology, in the formation of our minds, in locating the source of consciousness, and even in the possible logic of belief in God.


Over the last 100 years the study of quantum phenomena has shown that there is more than the material world of matter, force and motion. The experts have often speculated about a role for observers, even for consciousness, in an understanding of quantum measurements [1] [2]. More recently many [3] have speculated that quantum physics itself reveals consciousness. There are now many cottage industries seeking to develop ideas of ‘quantum consciousness’, even of ‘quantum spirituality’. It has become popular to say that ‘quantum theory shows that consciousness creates physical reality’, and that this fits into an advaita non-dualist framework where only the Godhead is real while everything else is a generation of consciousness.

For many, however, such a monism where all beings are numerically identical does not seem to be the ultimate answer. People generally consider unselfish love to be superior to selfish love. If all persons were identical in being, then unselfish love between distinct persons would be impossible. The reality of unselfishness disposes many of us to dualist views in which people are ontologically distinct and in which God and worlds are distinct [4, p. 18]. It is important for theorists to explore theories in which minds and god are distinct. If mind and matter are distinct then many philosophical problems with materialism may be resolved.

I here present some ideas to help interpret quantum mechanics, mind and theism in a non-reductive approach. These ideas describe a set of multiple levels which all exist simultaneously in their own manner. Rather than everything being a system of objects at one fundamental level, we can develop a theory of multiple levels, each with different kinds of objects existing in their own kinds of spaces. The first challenge is to see how quantum substances exist on a single level. A second challenge is to show how objects interact between levels.