A group of us gave a talk on this subject at Bryn Athyn College on Oct 12.


All the talks together can be seen at www.theisticscience.com/talks.htm.

My two talks, which focused on how the spiritual and mental can affect nature, are:


Expanding the idea of Discrete Degrees
Slides: powerpoint and pdf.

A mechanism for spiritual influx into the physical
Slides: powerpoint (including movies), and pdf (no movies).

A longer article is being written to appear next year.
Posted by Ian Thompson at 7:28 PM No comments:

How Spiritual Influx into the Natural Shows Itself in Physics

At this meeting there is a presentation of our new ideas for the interface between the mental and the physical. More specifically: How Influx into the Natural Shows Itself in Physics.
These are new ideas based on inspiration from the Writings of Emanuel Swedenborg, who seems of all history to have the best lead-in to these issues. 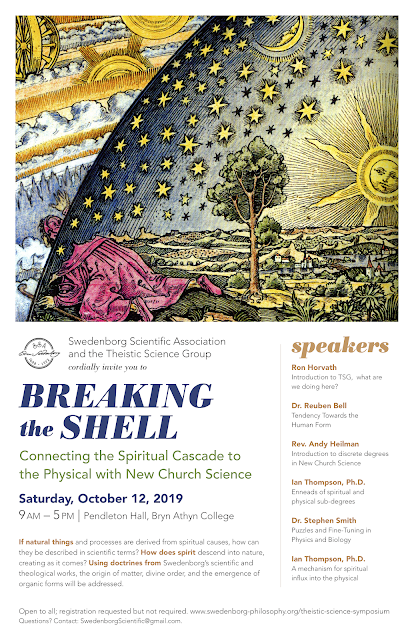 Posted by Ian Thompson at 8:32 PM No comments:

Breaking The Shell: Connecting the Spiritual Cascade to the Physical with New Church Science

There will be a Theistic Science Symposium, Oct. 12, 2019 at the Bryn Athyn college, PA.

The Swedenborg Scientific Association (SSA) and the Theistic Science Group (TSG) are pleased to extend an invitation to the Theistic Science Symposium, Oct. 12, 2019 at the Bryn Athyn college. This event is free for everyone. Sure to be a very fascinating day, please see the agenda for details. Registration requested at http://www.theisticscience.com/BreakingTheShell.htm. 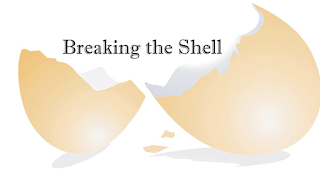 For me this will be very important.  It will be an opportunity to explain in more details my idea for Can minds have effects in nature? How? as described in the previous posting.
The first part of the day will be taken my talks from my colleagues to lay the groundwork, so we can understand how spiritual influx into the natural can and must make sense even within science.  We are discussing our ideas every week in a group Skype call, and we will coordinate the details of our talks to make them easier to follow.
So many people think that materialism is inadequate to understand how minds and spirits might exist and live in relation to the world, but have no good ideas how this might take place. Some think that revealing the quantum physics is important for physical measurements and/or biological operations is the important step to going beyond materialism. In a sense that is true, but the effects of quantum physics are either absolutely essential for even ordinary processes (e.g. in sub-atomic and nuclear physics - my day job), or make only extremely small differences compared with classical physics.
So now I want to show how electric processes of attraction and repulsion could themselves be modified and managed by influx coming from outside the physical.  These effects are much larger than quantum effects, and could well be very important for producing the detailed molecular reactions that occur in cells -- or at least the timing of the molecular processes that need to be managed for the successful life of a cell.

So my talk, and the end of the day, will give more details of what I have in mind for how spiritual and mental things can influence the physical. And do so in a way that minimizes the number of laws of physics that have to be changed to allow this to occur. If you come, you will see!

The event will be live streamed and later available on youtube. Details of that to come.
Posted by Ian Thompson at 9:29 PM No comments:

Can minds have effects in nature? How?

By ‘intermediates’, I am thinking first of humans, and then all animals and plants as well as each living cell. These are all living creatures, and we presume that they all have at least some primitive kind of mental life: at least some will or motivation or telos, along with instinctual responses that reflect some implicit wisdom for good ways of responding to enhance and continue life.

There may well be spiritual beings of some sort as well, but they would be intermediates between all us living creatures and what is greater than us spiritually, so I should think: angels, saints and all who have lived who want to do what is good and useful (and maybe also those who want the opposite). Direct divine influence is possible as well, of course.

Because these things above are all intermediates, they are ‘riders’ or ‘modulators’ on the pathways of life from the Divine that the Lord uses to enliven and influence us in the world. All the good spiritual beings, for example, would be saying saying ‘not my will but thine’ when they do something.

For intermediates, I just refer to our abilities to feel, think and do things from feeling and thinking. That is, I assume we have minds that do these things, and hence have causal effects on body and world. This applies to all living creatures to varying degrees of fullness and detail. Any plausible account of the world has to take minds in some sense as essential part or being of mental lives. The substance of minds is love/desire, and their form is their thinking. This is just applying Aristotle’s common categories to some things very obvious. The substance gives the mode of its persistence through time, and the form gives its structure at present. Naturalism might want to call these esoteric and unbelievable, but they are really what we are all very close to, namely our minds.

I now insist that, in all our bodies, there must be influences from these intermediates that give results not as predicted by the laws of physics. They must be able to have some effect: able to make a difference to physics (otherwise, why bother?). The modulation from intermediates results in a kind of ‘final cause’ in physics, since it directs physical bodies towards some end or target or lure.

And now I think that these differences in physics ought be observable even to physicists. They are much larger than resolving quantum uncertainties or probabilities, since the effects of motivation and telos happen in every minute in our living bodies, and so cannot be just biasing some remote probability. I agree that it might be difficult, since this is to distinguish agency from chance. But it is only the chance of ignorance, not of quantum physics.

I even have a more specific idea for what these differences might be in physics, which I will explain more in the next few months when I work out a bit more detail. Sometimes, at least, the patterns should be repeated.

It maybe can be seen in protein folding, where there has been persistent ignorance of the causes of rapid in-vivo folding for the last 50 years?

I am beginning to see a way to change physics to allow final causes to have effects from causes originally in minds. I will explain (in more detail soon, somewhere) my idea for some of the ways ‘supporting efficient causes’ may assist final causes to operate in nature. The idea is some local modification of specific physical properties in order to reach some kind of target or lure or end from the final causes. If physical properties are changed, then something should be measurably different.

The physical variations needed to reach targets are much larger (by many orders of magnitude) than the range required by the Heisenberg uncertainty principle in quantum physics.  Given that, however, I want in reality to work on targeting with quantum fields. So the HUP will be still taken into account.  But in the meantime, Newtonian mechanics will be a very good approximation.


Is the physical world causally closed?

We are admittedly breaking the causal closure of the natural world, and breaking some conservation laws in some particular circumstances, so it’s a bit of a conjecture. Materialists may say that this makes it all impossible, since conservation laws are ‘known to be satisfied to high accuracy’. I reply: have you tested conservation laws where processes like this may well be occurring? That is, testing where we expect volition (etc) to be important?

If course, if you can already see the limits of naturalism, then the failure of the causal closure of the physical will not be a great surprise.

Posted by Ian Thompson at 7:51 PM No comments:

Labels: Aristotle, causal closure, final cause, physics, protein folding
Newer Posts Older Posts Home
Subscribe to: Posts (Atom)
Theism is the belief that God is the creator and sustainer of the world, and hence of all life and activity within the world, yet in a way whereby the world is as if active from itself.
Physics and psychology want to know the causes of natural and mental things.
This blog relates to the website www.theisticScience.org and the more detailed expositions there, along with material for my recent book at www.BeginningTheisticScience.com: