God does not support the world only by physical laws

It is generally agreed that, according to theism, God has not only created the world, but also sustains it in its day-to-day operation. If God stopped sustaining the universe, then everything in it would immediately cease to exist. Such a view can be contrasted with deism, whereby God was only the creator of the world, and has no further part or role in its existence or operation. In deism, the world must have within itself its continued principles of being. Both those views, of course, are to be distinguished with a-theism, which is like deism only without God: there is only the world continuing to  exist independently.   Note, finally, that all the above views are compatible with both universe and multi-verse theories of the world: we simply take 'the world' to refer to everything that exists.

We can order these views as theism -- deism -- atheism, with progressively fewer roles for God. In the last atheist view, there is no role. Theism is the opposite: that God is the direct or indirect source for actual causes in the world.

It is claimed often that modern science supports the view that the world (universe, multiverse, or whatever) exists in a self-sustaining manner, and has no causal input from outside it. That is to claim that scientific evidence supports the causal closure of the world. In that case, there are apparently no effects of God, and hence divine existence is unnecessary.

Some scientists with religious inclinations, and those desiring to see how the existence of God may be compatible with the supposed scientific evidence, insist that God still has a role. Namely, God is responsible for the laws of nature, and hence that God sustains the world by means of those laws. This view is essentially deism, but in popular culture the application of this theory to evolution has been called 'theistic evolution'. Under that name it has been supported by prominent scientists such as Francis Collins, Francisco Ayala and Stephen Barr. It is often taken as originating with Kepler, though in later posts we will investigate some earlier roots.

The laws of nature in modern physics are often essentially characterized in terms of their symmetries. These are the reflections/rotations/dilations that are allowed at the deepest level. More precisely, it is the 'underlying group structure' of the fundamental forces / fields / strings that is used to describe and distinguish different theories. Superstring theory is essentially the adoption of a particular set of fundamental symmetries at some deep level, though not at those levels we see with our eyes. 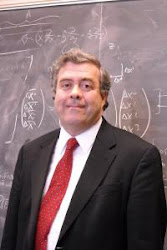 If God only sustains the world by means of natural laws, and these laws are only strict at some deep level, then it suggest a slightly more active role for God than in deism. But is it enough for theism?  Stephen Barr wrote along these lines in his First Things article "Fearful Symmetries" last year. He sees God essentially as producing the "great thought" that describes the deep symmetries, and hence sustains our world. This account enables him to continue as a mathematical physicist, and investigate these symmetries and these laws. However, it has particular consequences that hardly allow it to qualify as a theism.

The main consequence -- one Barr endorses completely -- is that "the world we experience is the result of processes that move upward". By 'upward', he means upward from the laws of physics to the evolutionary processes that produce living and then thinking creatures. These are just the processes that atheists point to, and he agrees that "that history--of matter self-organizing and physical structures growing in complexity--is correct as far as it goes."

Barr's view implies that all biological and mental processes are 'matter self-organizing', and can therefore be reduced to physical laws. The divinely-produced physical laws, he may insist, but physical laws nonetheless. There is nothing special in the human mind (if such minds are allowed at all to exist as minds) that allows humans to spiritually approach God in love, or even to think rationally. He might be reluctant to accept that conclusion, but that is the one that follows from his premises. He might seek endlessly for an account of 'non-reductive physicalism' for the mind, but, I believe, he will eventually fail.

The reason for this failure is that, in a proper theism, God enters into human life by means of spiritual and mental processes, and that God has causal effects in our spirits, minds, and hence also in our physical bodies. This is necessary not just for religious experiences, but also for day-to-day operations within us. In a fully fledged theism, the world is not causally closed, because it is open to God.

Stephen Barr is reluctant to allow this openness to God to affect his science. He wants to keep some deep rationality of physics as the dwelling place of God in the world, rather than in the souls / minds / body complexes that make up humans (and other living creatures that might be sufficiently similar).

Part of this reluctance stems from a desire to follow the so-called theistic evolution theory (more accurately called 'deistic evolution' as I explained above), and to not allow the possibility of intelligent design. To allow divine input into specific creatures appears to unacceptably 'violate' the purity of his deep rationality, and remove from his mind the firm basis of natural laws at the physical level.

Allowing divine input into the world, and allowing for causal laws that are not purely physical, is the task of the theistic science to come. For that, see the new book at www.beginningtheisticscience.com.
Posted by Ian Thompson at 7:40 PM